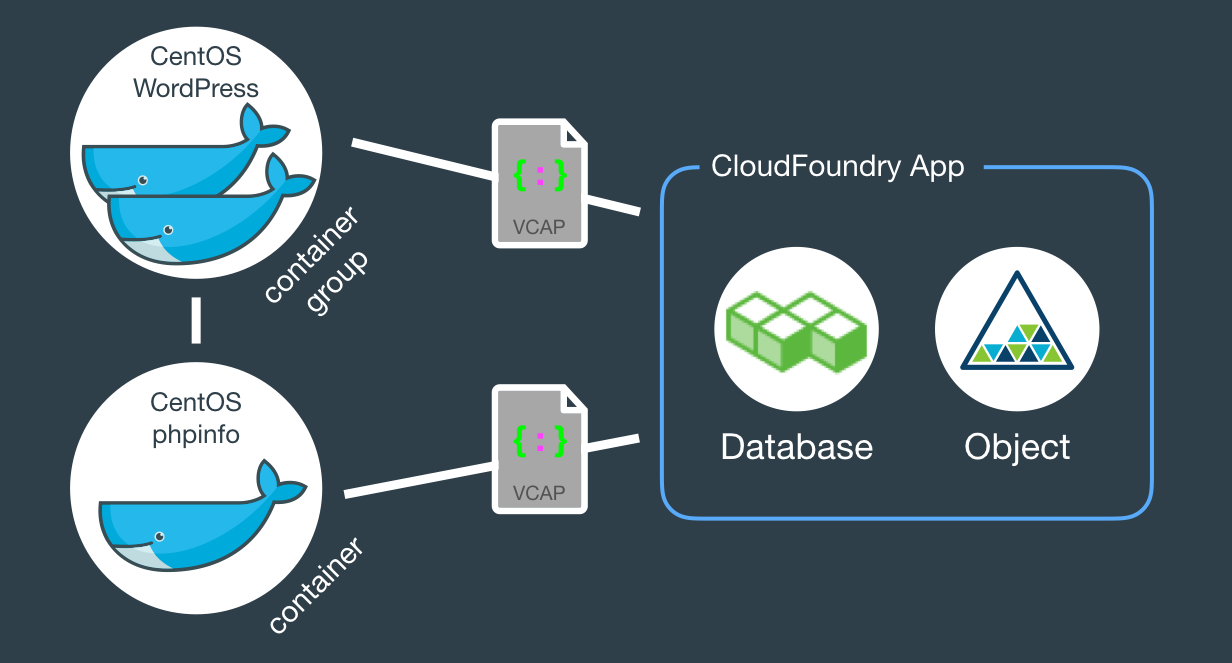 This document explains working examples on how to use Bluemix platform advanced features such as:

For this, I’ll use the following source code structure:

The source code currently brings to life (as an example), integrated with some Bluemix services and Docker infrastructure, a PHP application (the WordPress popular blogging platform), but it could be any Python, Java, Ruby etc app.

Before we start: understand Bluemix 3 pillars

I feel it is important to position what Bluemix really is and which of its parts we are going to use. Bluemix is composed of 3 different things:

This tutorial will dive into #1 and some parts of #3, while using some services from #2.

The architecture of our app

When fully provisioned, the entire architecture will look like this. Several Bluemix services (MySQL, Object store) packaged into a CloudFoundry App (bridge app) that serves some Docker containers that in turns do the real work. Credentials to access those services will be automatically provided to the containers as environment variables (VCAP_SERVICES).

The example source code repo contains boilerplate code that is intentionally generic and clean so you can easily fork, add and modify it to fit your needs. Here is what it contains:

bridge-app folder and manifest.yml file
The CloudFoundry manifest.yml that defines app name, dependencies and other characteristics to deploy the app contents under bridge-app.
containers
Each directory contains a Dockerfile and other files to create Docker containers. In this tutorial we’ll use only the phpinfo and wordpress directories, but there are some other useful examples you can use.
.bluemix folder
When this code repository is imported into Bluemix via the “Deploy to Bluemix” button, metadata in here will be used to set up your development environment under DevOps Services.
admin folder
Random shell scripts, specially used for deployments.

The easiest way to deploy the app is through DevOps Services:

Under the hood: understand the app deployment in 2 strategies

Conceptually, these are the things you need to do to fully deploy an app with Docker on Bluemix:

The idea is to encapsulate all these steps in code so deployments can be done entirely unattended. Its what I call brainless 1-click deployment. There are 2 ways to do that:

From here, we will detail each of these steps both as commands (on the script) and as stages of the pipeline.

At this point, WordPress (the app that we deployed) is up and running inside a Docker container, and already using the ClearDB MySQL database provided by Bluemix. Access the URL of your wordpress container group and you will see this: 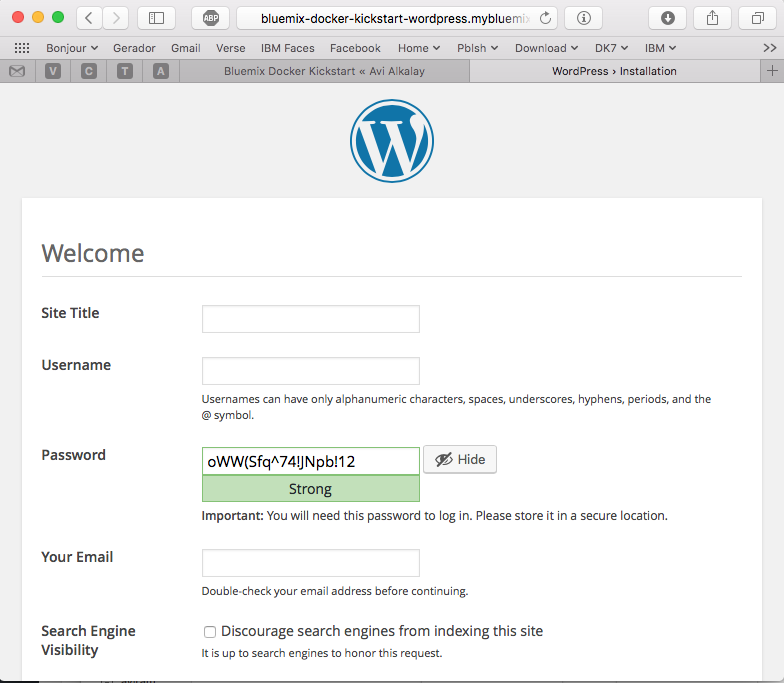 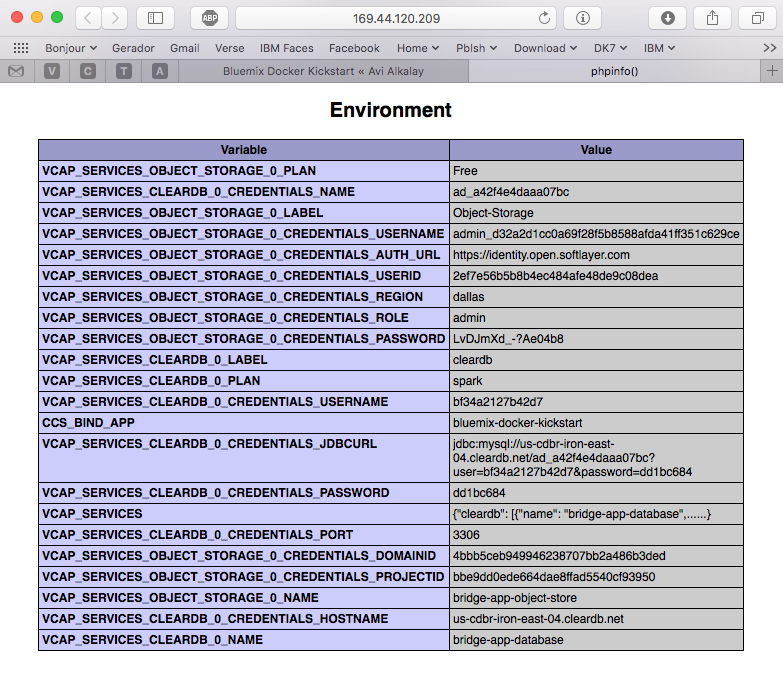 I use these credentials to configure WordPress while building the Dockerfile, so it can find its database when executing:

So I’m using sed, the text-editor-as-a-command, to edit WordPress configuration file (/etc/wordpress/wp-config.php) and change some patterns there into appropriate getenv() calls to grab credentials provided by VCAP_SERVICES.

The containers folder in the source code presents one folder per image, each is an example of different Dockerfiles. We use only the wordpress and phpinfo ones here. But I’d like to highlight some best practices.

A Dockerfile is a script that defines how a container image should be built. A container image is very similar to a VM image, the difference is more related to the file formats that they are stored. VMs uses QCOW, VMDK etc while Docker uses layered filesystem images. From the application installation perspective, all the rest is almost the same. But only only Docker and its Dockerfile provides a super easy way to describe how to prepare an image focusing mostly only on your application. The only way to automate this process on the old Virtual Machine universe is through techniques such as Red Hat’s kickstart. This automated OS installation aspect of Dockerfiles might seem obscure or unimportant but is actually the core of what makes viable a modern DevOps culture.

When Docker on Bluemix is useful

CloudFoundry (the execution environment behind Bluemix) has its own Open Source container technology called Warden. And CloudFoundry’s Dockerfile-equivalent is called Buildpack. Just to illustrate, here is a WordPress buildpack for CloudFoundry and Bluemix.

To chose to go with Docker in some parts of your application means to give up some native integrations and facilities naturally and automatically provided by Bluemix. With Docker you’ll have to control and manage some more things for yourself. So go with Docker, instead of a buildpack, if:

The best balance is to use Bluemix services/APIs/middleware and native buildpacks/runtimes whenever possible, and go with Docker on specific situations. Leveraging the integration that Docker on Bluemix provides.