Before the famous Brazilian Bossa Nova type of music we had Samba and before that, Choro. Each style evolved from its predecessor.

Many will translate the word choro as cry but nobody is sad. In old Portuguese, choro refers to the vibration of the strings of the acoustic guitar. But yes, it makes me cry when I listen to such a beautiful music.

Choro is a style being played for more than one hundred years. In the 1950’s people started to forget it because the Bossa Nova movement was flourishing and stealing the scene. But then a bandolinist called Jacob do Bandolim took it over playing in bars his wonderful compositions as Doce de Côco and since then Brazilian big cities, specially Rio de Janeiro, find enough room for all styles. In fact, one can find Choro shows 7 nights per week in Brazilian cities as Rio and São Paulo.

Around the end of the 1890’s Samba appeared as a direct descendent of Choro. Identical in rhythm and as melodic as Choro. But while Samba values more percussion and dancing, choro is more concerned with musical solos and harmony between instruments, as we can hear when the trombone plays together with the trumpet on O Trombonista Romântico.

Choro is Brazilian Jazz since before Jazz even existed.

The samples here are played by the outstanding duo of Zé da Velha e Silvério Pontes playing trombone and trumpet, a very uncommon combination of instruments for Choro, together with other excellent musicians from groups as Nó em Pingo D’Água, and other independent musicians. 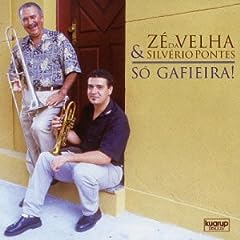 The harmony between them is so unique that I can say they are the best “chorões” in their old school style nowadays. Particularly about Zé da Velha, the trombonist, some people say he plays as he speaks, and his voice recalls his trombone playing. Just listen the famous Alvorada to understand that.

Other wonderful songs they registered in their recordings:

2 thoughts on “Bossa Nova to Samba to Choro”